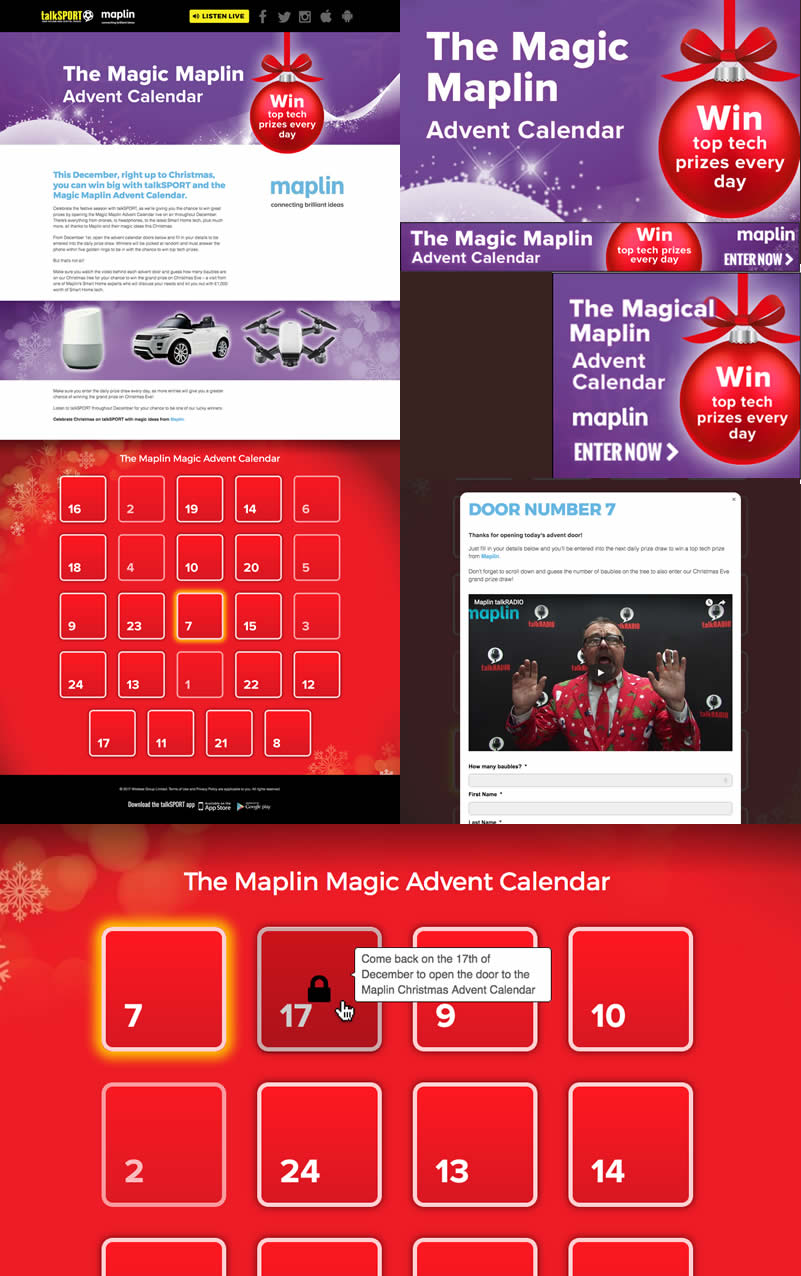 First up, Maplin. Not Maplins. Modern electronic retailers, not classic 80s sitcomery. By ‘classic’, I obviously mean ‘not very good’. ”Allo, ‘Allo’, and so forth. You can’t help but feel that Maplin were and are missing a trick by not getting the ‘Hi-de-Hi!’ people in for some ads. That’s what I’d do. But then I’m not the marketing guy. And Ruth Madoc can go die in a fire at the best of times. So I’ll just do what I’m told, as usual…

With that in mind, we’ll do an advent calendar, right?! Right. Well, kind of. To start with, this was meant to be a proper advent calendar. As in – open a door, see a new thing behind it! An offer or a prize or something! You know. How advent calendars actually work.

I don’t know if you’re totally on board with how much effort it would take to make something like this work online…but it’s a lot of messing about. So, vigilant workhorse that I am, I do that over a weekend. That’s my job. To deliver the goods on time; ‘on time’ actually being the 29th November this year, fact fans. A full two days before advent. But meh. If that’s what it’s gotta be, then that’s what it’ll be.

Anyway, back to the concept of advent calendars and what they mean and how they work…in the end – every door was the same. Clicking on door one was the same as clicking on door five. Or door twelve. Or door 22. About three days before launch, they decided they didn’t want prizes behind each door. They just wanted the door to function as a registration form to go on air.

In the end, the whole thing could’ve been done by ONE page. Essentially, there was no point putting in the effort to get a system of doors to go live at 0000 and come down at 2359 of a day. They all did the same thing. I like to joke about these things, but the whole functionality was built – each day had its own door as a blank canvas. They just didn’t care about getting different content for each door / day. JUST PUT THE REGISTRATION FORM. THE SAME FOR EVERY DAY. So frustrating. I couldn’t even break up the monotony of each door being exactly the same by featuring images of the prizes because they wanted them to ‘be a surprise’. I mean.

This whole campaign was running across three stations as well – talkSPORT, talkRADIO and Virgin Radio. For some bizarre reason, they wanted the title of the campaign to be ‘The Magic Maplin Advent Calendar’ across the former two stations and ‘The Magical Maplin Advent Calendar’ across the latter. I know. What’s the difference?! Those two letters are absolutely crucial, definitely. I mean, the thing makes no sense as an advent calendar, but at least we’ve got it running as marginally different names across brands.